The 150cc bike segment is the most popular motorcycle segment in India. The reason behind the popularity of this segment is affordability and sportiness. The bikes in this segment are best for the entry-level riders. Indian companies like Bajaj and TVS are actively participating in this segment and, these brands have particularly launched bikes like Pulsar and Apache. The TVS Apache was launched in our markets back in 2006, after 6 years, the motorcycle went under some serious design and feature upgrades. Moreover, the company has also added aerodynamic look, LED DRLs and an agile motor. 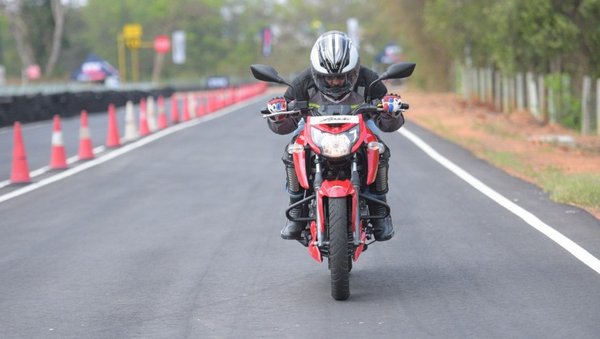 After looking after the rising competition, the company decided to launch the 160 Apache is named as TVS Apache RTR 160 V4.

TVS bikes also get quite popular after the company started the TVS One Make Championship with its performance-centric goal. After looking after the rising competition, the company decided to launch the 160 Apache is named as TVS Apache RTR 160 V4. Here is our review after riding the bike for a few days.

The first thing which will pop up in your mind after having the first glance of the Apache 160 4V is that the motorcycle looks very much identical to its elder 200cc sibling. The bike has a muscular design with a bulky tank along with tank shrouds. The illumination duties are done by sleek headlamps with LED DRL along with side blinkers. The taillight and side panels of the motorcycle mimic the Apache RTR 200. I personally like how decently and, sophisticated stickers are placed over the bike. The bike gets a nice flowing design, thanks to the chequered flag sticker placed back the fuel tank vents along with glossy black TVS insignia looks mesmerizing. Moreover, the blacked-out alloys with TVS Racing written on it to enhance the sporty quotient of the motorcycle. 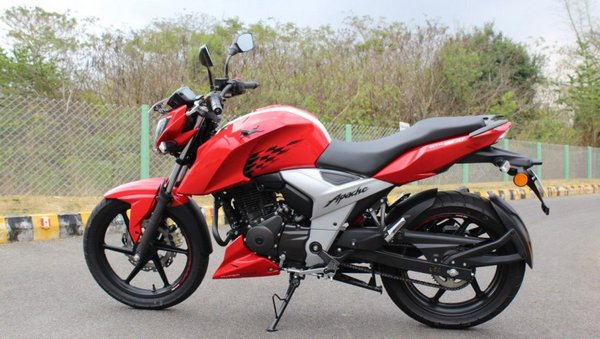 The bike has a muscular design with a bulky tank along with tank shrouds.

The 2018 TVS Apache RTR 160 4V offers a fully digital instrument cluster and, the design of the display is similar to that of Apache 200. The Carburettor version of the bike features an Amber backlit digital console. On the other hand, the fuel-injected version gets white backlight. The fuel-injected variant also displays low-fuel trip mode, acceleration and top speed recorder, gear position indicator and text display area. While the carb variant misses out these features. 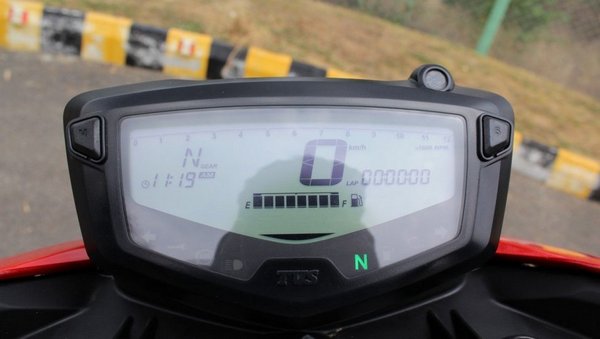 The 2018 TVS Apache RTR 160 4V offers a fully digital instrument cluster and, the design of the display is similar to that of Apache 200.

Moreover, the instrument cluster also has a provision for ABS and immobilizer, which we can expect to see in future. Both the variant of the bike offers clock, shift light, service and low battery indicator. The choke in the carb variant is placed following the fuel tap. The tank is sufficient enough to store 12-litres of fuel at once and it also offers off-set cap like the Apache RTR 200.

The bike is powered by a single-cylinder, 159.7cc engine with oil and air-cooled tech based on the RTR 200. The company has worked on various fronts to suit this bike. Due to counterbalance, the engine is refined until 9,000 rpm. The power produced by FI and carb version is 16.8 Ps and 16.5 Ps at 8,000 rpm. The FI version of 160 V4 has a peppy throttle response but, I managed to touch speed as high as 114 in the carb and 111 kmph in the FI one. TVS claims that the top speed of the FI version is 114 kmph and 113 kmph of the carb variant. Moreover, the benefit of having a fuel-injected variant is it spills out cleaner emission and it also helps is easier cold starts. 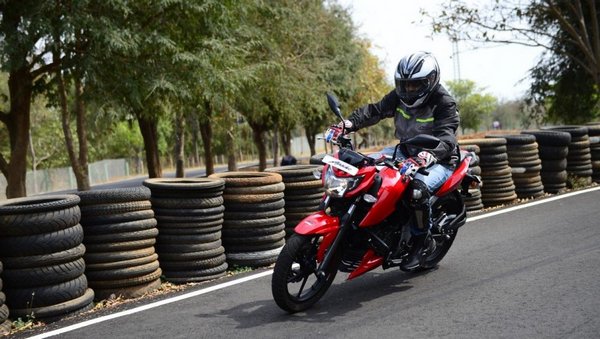 The bike is not agile like the RTR 200, but it's capable enough to compete against the bikes in its own segment.

The bike can easily cruise down at a speed of 90 kmph. The gearshifts are smooth and accurate. The first gear is in the 160 V4 is long enough for an effortless crawl in the traffic. The gearbox comprises a 5-speed unit and it’s quite surprising to see that I haven't faced false neutral for a single time. The bike is not agile like the RTR 200, but it's capable enough to compete against the bikes in its own segment.

The engine of the Apache RTR 160 4V rests inside the double-cradle split Synchro Stiff frame. The shock absorption job is done by telescopic forks at the front along with a race-tuned Showa monoshock at the rear. Moreover, the front forks also offer a fork seal guard. At the front, the Apache RTR 160 4V employs 90/90-17 49P section tyre and, the rear comes with 130/70-17 M/C 62P tubeless rubber tyre. On the other hand, the carb variant with rear drum brake gets 110/80-17 57P section tubeless tyre at the rear. Thanks to the single piece seat and single piece handlebar which offers a superior amount of comfort and an upright riding posture. 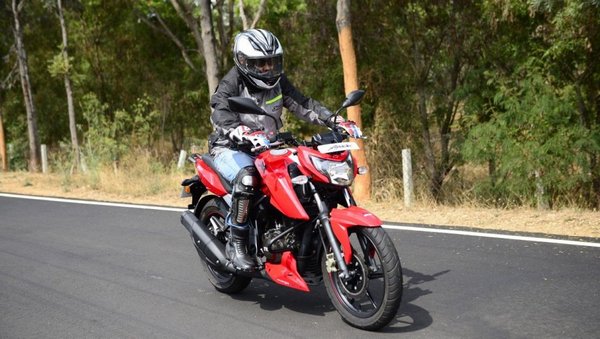 The shock absorption job is done by telescopic forks at the front along with a race-tuned Showa monoshock at the rear.

The thing I loved most in the RTR 200 is astonishing stopping power and well-arranged braking system and, I would say that the RTR 160 has lived up to my expectations. It doesn't matter how fast you are riding the bike, just push the brake lever and see how efficiently the bike decelerates. The brakes provide commendable feedback along with the ample amount of bite. But, the motorcycle stills lacks ABS. The suspension works pretty well on the tarmac roads and, it also supports stability while going hard over the corners. The Remora tyres up front and rear offer an ample amount of road grip, but it starts protesting as soon as we push it to its limits.

The TVS Apache RTR 160 4V is being offered in three variants such as Carburettor variant with front disc and rear drum brake, priced at Rs 81,490, carburettor version with a disc on both the ends priced at Rs 84,990 and at last the Fuel Injected (FI) variant with the disc at the front and rear carries a price tag of Rs 89,990. All prices are at ex-showroom, Delhi. 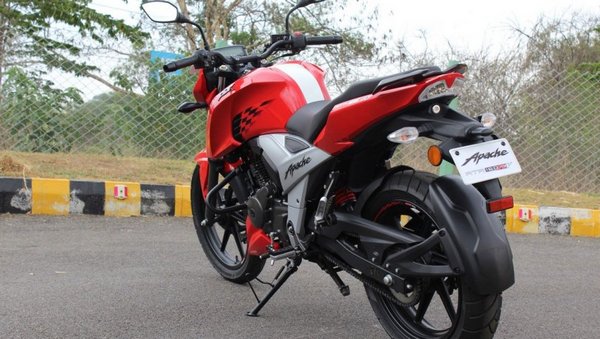 The RTR 160 is very refined, comes with a powerful braking system and a comfy suspension system which will make your long rides much effortless.

The Apache RTR 4V is just Rs 3,007 cheaper than the RTR 180 ABS. The RTR 160 is very refined, comes with a powerful braking system and a comfy suspension system which will make your long rides much effortless. It is the most fun to ride 160cc bike in its segment. 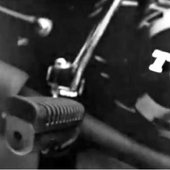 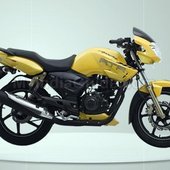 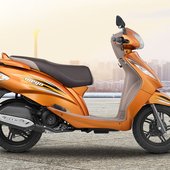 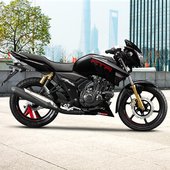 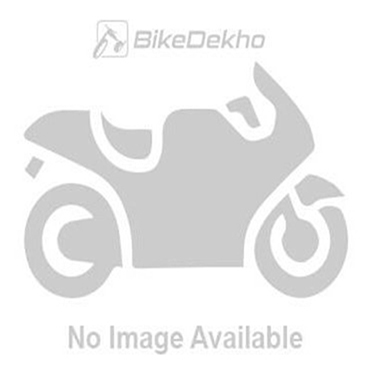 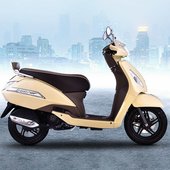