26/06/2019 | Hero Xtreme
Here's the first ride review of the Hero Xtreme 200S. We've got bike to test at BIC. So, is the all-new fully-faired Hero bike feels or rides like Karizma?

Hero Xtreme 200S was an unexpected launch for us as the motorcycle was surprisingly launched with the Xpulse twins. Is this fully-faired bike a re-born Karizma??  Read this full review to know more.

The X range of Hero is quite popular and well-recognized by the people of India. Hero Motorcorp first launched the Xtreme 200R last year into the Indian market and then they plan to take some more steps forward to make it more purposeful bike. Afterwards, the next bike in the company's portfolio is the off-roader friendly Xpulse 200 which was unveiled at the Auto Expo 2018. The Xpulse 200 is quite capable of turning heads. It has become the most-affordable off-roader bike in India and, Xpulse 200 is a capable motorcycle. The second Xpulse bike named as Xpulse 200T shares its DNA with Xpulse 200. The Xpulse 200T is a road-focused machine which is specially built to clock down long distances and, it is attracting touring fanatic community.

The Xtreme 200S is tuned to be a more performance-focused motorcycle.

But, Hero has finally launched the Xtreme 200S. The new 200cc Hero sportsbike is quite similar to the Xtreme 200R. The Xtreme 200S is tuned to be a more performance-focused motorcycle. Just to prove their point, Hero organized the launch and media ride of the bike at the Buddh International Circuit, where we can precisely challenge the capabilities of this fully-faired machine. Before telling you about riding experience, firstly We'll tell you about the looks and features on offer.

Hero Karizma was first launched in Indian 15 years back and, the main reason behind its popularity is a fully-faired look which has attracted thousands of biking enthusiasts. The first -gen Hero Karizma was value for money bike and, the bike was popular because riding a fully-faired bike feels like riding a big bike. Afterwards, many companies tried their luck in offering the fully-faired sports bike and, Karizma started losing its momentum and dominance. When the Hero Xtreme 2000R first launched in India, it was introduced as ‘spiritual’ successor to the Karizma. This move of Hero Motorcorp was especially to reignite the love for Karizma among the enthusiasts in the country again. 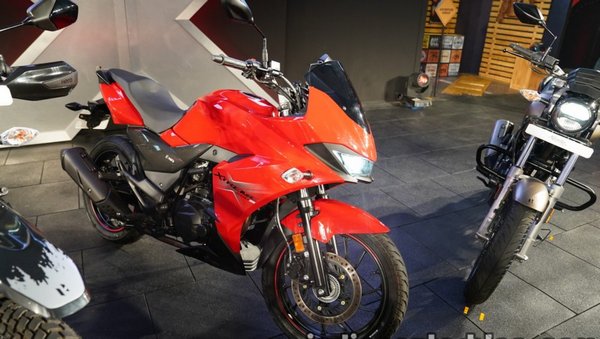 It’s quite innovative to see how a bike maker has changed a street naked bike into a fully-faired sports bike by doing some tweaks.

The bike gets side fairing which is fused well with the overall design language of the bike. Illumination duties are done by LED headlamp which is neatly embedded into a blacked-out panel. The front design is very decent and simple. The side fairing has been cut and shaped in a way that sometimes it looks like an Italian Superbike and sometimes some bits of this bike resembles from Karizma. It’s quite innovative to see how a bike maker has changed a street naked bike into a fully-faired sports bike by doing some tweaks.

The fuel-tank is well sculpted and it also provides some space to accommodate your legs if you go a bit hard over the corners. The bike gets a 12.5-litre fuel tank, angular two-piece pillion grab rail, blacked-out exhaust muffler and one-piece rider-oriented sport seat. The bike employs the same set of alloy like the Hero Xtreme 200R. The bike rolls on 100/80-R17section MRF tyres at the front along with 130/80-R17 section tyres at the rear. Hero Extreme 200S is smart and mesmerizing from every angle.

The all-new fully-faired Hero Extreme 200S also comes loaded with advanced features which will make your everyday commuting much easier and effortless. The bike employs a smart digital instrument cluster and, this feature is also offered with the Xpulse Twins. The new LCD unit provides all the riding aids like Bluetooth connectivity option for phone-based navigation and call information. 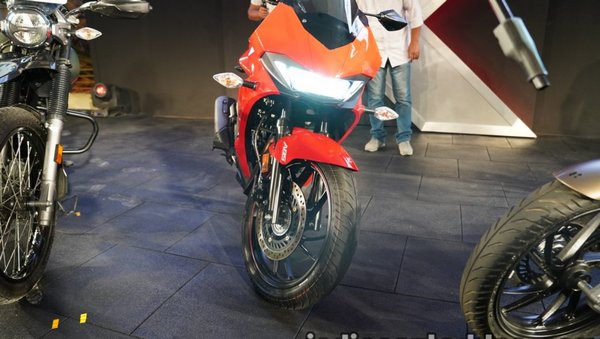 The Hero Xtreme 200S share headlamp unit along with LED taillamp from the Xtreme 200R.

The instrument cluster of the Extreme 200S provides information like 7-bar fuel indicator, speedometer, odometer, two trip meters, gear-position indicator, date, time, riding time and average speed while the Bluetooth connectivity provides information like navigation by showing a turn-by-turn distance-based pointing the arrow and information about who is calling. The Hero Xtreme 200S share headlamp unit along with LED taillamp from the Xtreme 200R. Moreover, the motorcycle also features a single-channel ABS as standard.

The Hero Xtreme 200S offers an upright but mildly sporty riding position like the Xtreme 200R. The seating position is high at 795mm and, it comes equipped with swept-back foot pegs with a high raised handlebar. The Extreme 200S doesn't feel any different from the Extreme 200R in terms of riding posture. The main reason behind it is the fully-faired bike is meant to be an all-rounder bike. The bike you take every day to the office can be a bike which you would love to take out on the weekend for some thrilling experience. We've got the bike at BIC to ride at least for 6-laps, but the commute-biased position was not a big problem for us while we were pushing the motorcycle to its limits. One thing which is very clear from our minds is the Hero Extreme 200S is best for city riding conditions. This bike is an overall package of sportiness and comfort. 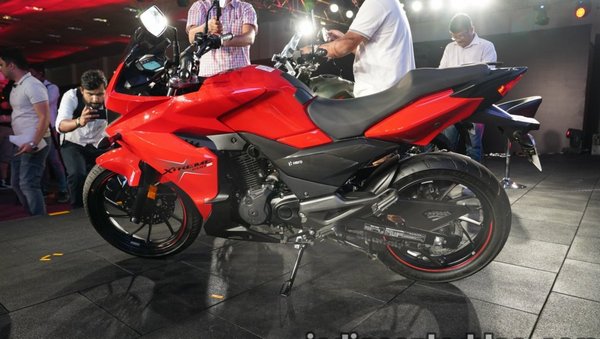 The seating position is high at 795mm and, it comes equipped with swept-back foot pegs with a high raised handlebar.

Hero motorcycles use twining system like Xpulse twins share their own set of chassis and engine dynamics. Same goes with Extreme 200R and 200S. This means that engine and chassis of the recently launched Extreme 200S are virtually the same as the 2018 Extreme 200R. Though the bike gets updated with some minor tweaks to its hardware. 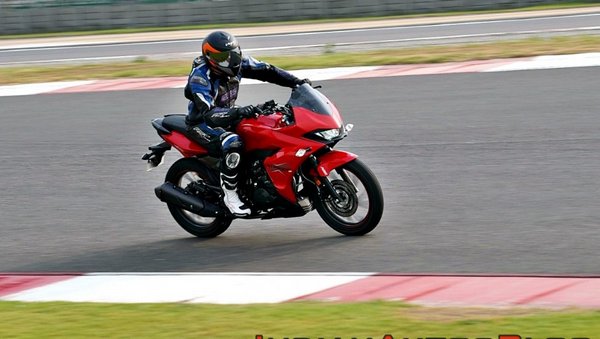 After crossing the 90 kmph speed limit, you may feel the vibration coming from footpegs and handlebars.

The motorcycle gets propelled by the 200cc single cylinder, air-cooled mill which churns out 18.4 bhp of power and 17.1 Nm of peak torque. The engine comes paired with a 5-speed gearbox. Like the Xpulse 200, there is no fuel-injection being offered with the Extreme 200S. That's why the bike offers decent grunt on the race circuit. The company has selected a shorter ring of the race track to show bike's bottom-end torque more precisely. The all-new fully-faired Hero bike is agile in nature. Twist the throttle and, the Extreme 200S will show what it is really capable of. The motorcycle will lose is steam at 7,000-7500 rpm. The bike feels at its best when it maintains a speed between 80 to 90 kmpl, at this speed the vibrations on the bike are minimal. After crossing the 90 kmph speed limit, you may feel the vibration coming from footpegs and handlebars. We haven't got the chance to check the top speed because the circuit which we've got to test doesn't include the straight line section. But, we can expect the motorcycle to have a top-speed between 120 to 130 kmph. The bike feels very much familiar like the Hero Extreme 200R and, it's agile enough to put smiles on our faces during 6 laps. The transmission feels quite smooth and quick and is capable of extracting the maximum amount of power from the engine. For countering the bad road conditions, the Extreme 200S gets a 37mm telescopic suspension at the front along with a 7-step pre-load adjustable monoshock.

The fully-faired Hero Extreme 200S has marked the return of the company's entry-level sports bike. We can call this bike a 'spiritual' successor to the Karizma as the motorcycle is not different in terms of driveability and performance. This is a very capable bike, agile in nature and can attract people towards itself. The motorcycle is specially built to attract a younger audience. The Extreme 200S is not a game changer, but it is a strong competitor which can compete with other bikes in its segment. The fully-faired Hero bike carries a price tag of Rs 98,500 (ex-showroom, Delhi). It rubs its shoulders against the likes of Yamaha FZ25, TVS Apache RTR 200 V4 and Bajaj Pulsar RS200.

The Extreme 200S is not a game changer, but it is a strong competitor which can compete with other bikes in its segment. 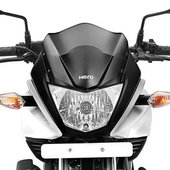 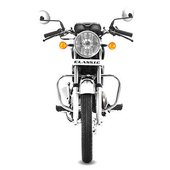 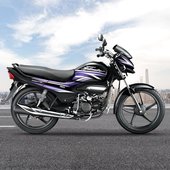